Notes on a Track

Melaleuca can be reached by light aircraft. For details contact…*

Shortly after leaving Melaleuca, [The land sings] cross Moth Creek then head southwards across the buttongrass plain [(a warning or welcome?)] towards the New Harbour Range. The track [an opera] sidles around the base of the range [swelling] eventually [into] leading to Cox Bight. This large bay is [footfall] interrupted midway by rocky [then falling] Point Eric. Campsites are found at the [into] outlet of Freney Lagoon and on the eastern side of [embrace] Point Eric.

A track is memory.

A track is relief.

A track is company.

A track is faith.

Once, when I was researching an article, I met a Wedgetail Eagle. The man who I had come to interview invited me into the kitchen of his stone cottage. He said, ‘wanna see something?’ I followed him through his garden. He knelt in front of a large, low cage and opened the door. Crouched, I met the eagle. It was as big as a house, its eye was the size of the front door, its wings spanned the roof, its talons pieced the earth and its legs were actually the masts of two ships. I was soft, white fat, prey.

Walk [dawn] east [float] up the beach to Black Cliff [pair of Pied Oyster Catchers strut] and follow the track over the headland to the eastern end of Cox Bight. At Buoy Creek [Grey Fantail, Scrub Tit, flash of Burrowing Parrot] the track leaves the beach and crosses buttongrass plains [we march] to the foot of the Ironbound Range. On the way it climbs over the Red Point Hills [then blow], crosses [boots off] two major creeks, [boots on] and winds around the Spica Hills, before reaching the Louisa Plains [stride]. The many small creek crossings can be [then lie down] hazardous after heavy rains. Good, forested campsites can be found on [rocks in tea coloured water] either side of Louisa River. Cross to the eastern side, with the aid of the fixed rope. If the river is in flood, [benediction] delay crossing until the level drops (refer ‘Hazards and Precautions: Creek and River Crossings’).

A track is instruction.

A track is silence.

A track can deceive.

The wrong track is a bad place,

but even the wrong track is better than no track.

Once, when I was sailing in Tonga I met a Humpback whale. She appeared, a ridgeline in the ocean. I slipped into water and saw the afterlife beneath my finned feet. It was a depthless changing hue of blue. And even with my heart pumping and the thrill of life so hard, the pull to the underneath was strong. Then the blue took a form, a shape so huge I couldn’t see an edge. The whale. Her eye locked on mine. She drifted through the sea and caught me. All the air left. Then she let me go and I rose like a cork. Later, I swam with her for stretched minutes. That time she held me lightly, let me fin alongside. She wore barnacles like jewels. When she left, the sea was lonely.

The Ironbound Range is [heatstruck] subject to rapid changes in weather. Do not try to cross in adverse conditions. Carry water in all weather.

From [waters meeting] Louisa River [don’t look up] the track climbs steadily. This is one of the hardest parts of the South Coast Track, but [step] also [rest] one [step] of the most rewarding. In fine weather [southern] there [snow] are superb [skinks] coastal [bask] and mountain views. After traversing the top of [avoid] the [tiger snake] range a long decent through dense rainforest leads to [sudden onset claustrophobia] the rocky beach at Little Deadmans Bay where [bend to wash the trace of shame] there is a well-sheltered campsite.

Once, when I was in Far North Queensland visiting my daughter who was working on a cattle station I watched a wild bull tear up the earth. Sods flew and landed like bombs on the roof of the Toyota where I sat. The trees shivered. Two helicopters hovered. Riders on tough, wiry stock horses (including my daughter) pulled their hats low in readiness and circled. A cloud of budgerigars scattered like bullets from a pellet gun. The bull bellowed, then swung his massive head and charged.

Prevention: know your group and its limitation [shit and spit, quake and quiver of fat, soft flesh], modify plans as necessary.

Stay on the track.

Make camp well before dark or at the first sign of stormy weather.

Keep together [laugh and curse and wait].

If you get lost: Stop. Sit down. [have a dart] Think calmly. Check your map and compass. Think about the terrain you have just travelled through.

Climb a tree or go to a high spot to look for landmarks. [a knob, a ridgeline, a headland, a beach, a creek, perhaps]

Do NOT continue travelling until you know where you are. [remember this for life]

If necessary set up camp.

If still lost, put out a distress signal.

From Little Deadmans Bay cross [purple haze of melaleuca] buttongrass plains and [drunken bees] the sandy Turua Beach before traversing Menzies Bluff. Continue through forest [glow of raven’s wing] before dropping down to Prion Beach. Follow the [ghosts of walkers past] beach to the eastern end of the dunes. Use the boats to [escape memories] cross the lagoon (refer Hazards and Precautions: Boat Crossings). Do not attempt to [recall that which you do not know] walk across the mouth of the lagoon – [for] perilous quicksand and freak [tracks] waves occur. Follow [so, be quiet] buttongrass moorlands [till] for some kilometres then climb through [cracks appear] spectacular [in] mixed [patterns] forest, before [which,] descending to Surprise Bay. At Surprise Bay [disturb a den of snakes] follow the beach to the riverlet crossing (good campsites are found on the shelf above [then flee to] the eastern end of the beach [a place where a raven and a butterfly wait]).

Once, when I was sorting through my dead father’s papers I found a letter from his mother to his father. In perfect penmanship and restrained prose my grandmother explained she would no longer put up with his other women and his vile temper. She wrote after the children were in bed, to the hiss of the kerosene lamp and the mosquitoes battering the gauzed in veranda, to say she would divorce him when he left the army. She would run the farm and he, he would leave her and the children alone.

The thin paper hummed. I put the letter in my camphor laurel chest and wondered at the things we leave behind.

From the Surprise Bay campsite [wake to stiffness and] climb steeply up and over the ridge, then [shiver] down through the forest to Granite Beach. Boulder [enter] hop [fatigue in new levels] to the eastern end, then climb up the small cliff near a waterfall. Take care [handhold, toehold, muscle memory] negotiating this section when seas are rough and/or the tide is high. Particular care [don’t think, just be & you are up] is required scaling the small cliff. There is a long ascent [bone numb] through forest [brain blank] to Flat Rock Plain where [glory be] there are good views. The climb [dry mouth] continues to the top of the South Cape Range. It is advisable to carry water. There are no campsites on the range. The South Cape Range [on and on] is arduous to cross, [walk and fall and] with [mud] boggy sections and [mud] buttress roots to negotiate. From the top a long [bloodsucking] descent through wet forest leads to a buttongrass plain, then over a series [how many?] of forested hills, before reaching South Cape Bay. Cross South Cape Riverlet [swollen joints shrink] and follow the sand upstream to the campsite in the [still] forest.

Once, when I was working on our farm, I stood in the sheep yards and looked at a lamb. In the cold of a September morning the frost had stolen into him. I stirred him with the toe of my boot. He spasmed, closer to death than life.

Because it was hopeless, I picked the lamb up and carried it, hard and death heavy, home. Into the concrete sink, hot water streamed. The lamb hung in liquid as warm as blood. Slowly its crusty birth jacket lifted like a veil. After twenty minutes my arms were red. I wrapped the lamb in hot towels, poured colostrum down its throat, placed it under the firebox and went out into my day.

It doesn’t matter if it lived or died.

The [wake to rain] track crosses a series [how many?] of beaches and headlands until [butt scream] steps [climb] lead up to a bluff overlooking South Cape Bay. Follow [march] the boardwalked track through the open heathland [blind to beauty] of Blowhole Valley – spectacular during its early summer flowering. After skirting [people] the lightly forested Moulders Hill, the track finally [arrives] comes to an end at Cockle Creek.

to remove all signs of having been somewhere or done something.

Once, when I was a schoolgirl, 10 years old perhaps, my new friends tricked me. They begged me to tell them a story. Flattered if slightly wary, I obliged. Into the story I went, so deep I didn’t notice the smothered giggles, until one girl held aloft a hidden tape recorder, ‘we taped you’ she shrieked. A shard of her laugh entered the hole the story left and stayed while my voice looped, tinny and earnest, through the rest of the day and into the night.

There are readily available guidebooks on South-West Tasmania that provide more detailed information on the tracks and natural history of the area than can be presented here. Your journey will be more informed and enjoyable if you can access these [#lifetip].

This essay is part of a new Sydney Review of Books essay series devoted to nature writing titled the New Nature. We’ve asked critics, essayists, poets, artists and scholars to reflect on nature in the twenty-first century and to grapple with the literary conventions of writing nature. Read the other essays in the New Nature series here.

Published August 10, 2018 Environment and climate
Part of New Nature: What does it mean to write about nature in 21st century Australia? A new wave of Australian nature writers write about Country, landscape, ecology, and biosphere.   All New Nature essays → 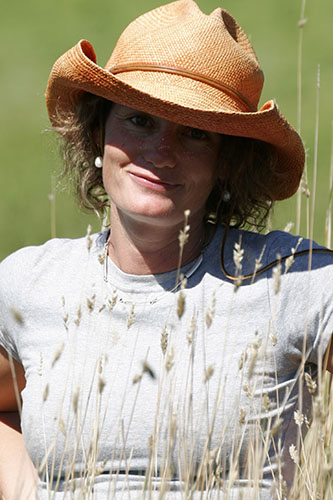 Maggie MacKellar lives on the east coast of Tasmania. She is the author of...